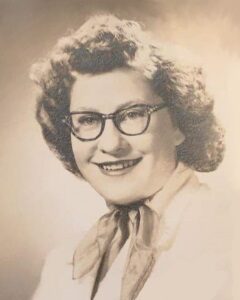 Funeral Service will be held on Tuesday, January 26, 2021, at 11:00 A.M. at Immanuel Lutheran Church in Brownton, Minnesota, with interment in the Oak Grove Cemetery.

Visitation will be held one hour prior to the service at Immanuel Lutheran Church in Brownton.

Anise Mae Selle was born on May 1, 1933, in Detroit Lakes, Minnesota. She was the daughter of Herman and Mattie (Christenson) Odegaard. Anise was baptized as an infant at the Lutheran Church in Lake Park, Minnesota, and was later confirmed in her faith as a youth in Lake Park. She received her education in Lake Park and attended Lake Park High School.

On August 15, 1953, Anise was united in marriage to Wallace V. Selle in Fargo, North Dakota. This marriage was blessed with six children, Renee, Randall, Tamie, Terry, Kay and Kurt. Anise and Wallace resided in Brownton since 1958. They shared 41 years of marriage until Wallace passed away on July 11, 1995.

Anise was employed in production at Telex Communications in Glencoe, Minnesota. She retired in 1998. Anise was a member of Immanuel Lutheran Church in Brownton, Minnesota.

She enjoyed helping on the farm, gardening, and ceramics. She loved making cards and socializing. Anise especially enjoyed spending time with her family, grandchildren and friends.

When Anise needed assistance with her daily care, she became a resident at Harmony River Living Center on April 23, 2015. She passed away there on Thursday, January 21, 2021, at the age of 87 years.