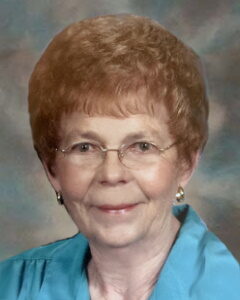 Anita Z. Peterson, age 84, of Hutchinson, formerly Hinckley, Minnesota, passed away on Tuesday, May 19, 2020, at her home in Hutchinson.

Private Family Memorial Service will be held at the Oakland Cemetery.

Celebration of Life will be held at a later date.

Anita Zinta Peterson was born on February 11, 1936, to Arvids and Milda (Emils) Kalnins on a farm in Allazi, Latvia, where she lived until the age of 8 years old. During WWII, Anita and her family fled Latvia to escape the Russian invasion and Communism in October of 1944, eventually finding shelter in a displaced persons camp in northern Germany. In 1949, they immigrated to a farm near Hinckley, Minnesota.

Anita was a graduate of the Hinckley High School Class of 1955.

On July 27, 1957, Anita was united in marriage to Lyndon Peterson at First Lutheran Church in Hinckley. This marriage was blessed with two daughters, Kimberly and Carmen. Anita and Lyndon lived in Minneapolis, Pine City, and in 1964 made their home in Hutchinson. They shared 62 ¾ years of marriage.

Anita was a dedicated wife and homemaker to her husband and daughters. Throughout her life, she worked in a variety of jobs. For the last 21 years of her career, she worked as an Administrative Assistant, for Ridgewater College, retiring in 1998.

She was a member of Christ the King Lutheran Church in Hutchinson.

Anita treasured her family and was known for her quilting and delicious wafer-thin Christmas sugar cookies. She also enjoyed traveling with Lyndon and his One Man Band and watching a variety of sports on television.

After a short battle with cancer, Anita passed away on Tuesday, May 19, 2020, at her home in Hutchinson, at the age of 84 years. The family wants to thank the Allina Hospice team for their loving care and support during the final days of Anita’s life.

Anita was preceded in death by her Parents, Arvids and Milda Kalnins; sisters, Sarma Kalnins and Anda Kick and her first husband, Joe Shatava and her second husband Clark Kick; and Brother-In-Law, Paul Libra.