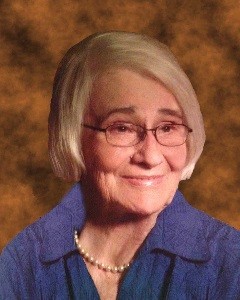 Memorial Services will be Friday, February 26, 2016, at 1:30 P.M., at Vineyard United Methodist Church in Hutchinson.

Memorials Preferred to the Mission Fund at Vineyard United Methodist Church in Hutchinson.

Ardeane Joyce (Bray) Summerfield was born on July 4, 1932, in Earl, Wisconsin. She was the daughter of William and Frances (Wesenberg) Bray. She was a graduate of Spooner High School in Spooner, Wisconsin, and received a teaching degree from Superior State Teachers College in Superior, Wisconsin.

On August 7, 1954, Ardeane was united in marriage to Darrell Owen Summerfield at the Congregational Church in Earl, Wisconsin. This marriage was blessed with five children, Thomas, Kent, Susan, James and John. Ardeane and Darrell resided in Hutchinson, Minnesota for 54 years. They shared 56 years of marriage together until Darrell passed away on June 26, 2011.

Ardeane was a teacher and later pursued a career as a nurse, before retiring in November of 2001. Ardeane was a member of Vineyard United Methodist Church in Hutchinson.

When Ardeane needed assistance with her daily care, she became a resident of Ruthven Community Care Center in Ruthven, Iowa.  She passed away there on Wednesday, February 17, 2016, at the age of 83 years, surrounded by family and friends. She will be fondly remembered as a loving wife, dedicated mother, and doting grandmother.

Ardeane is preceded in death by her Parents, William and Frances Bray; Husband, Darrell Summerfield; and Brother, Ronald.

Memorials Preferred to the Mission Fund at Vineyard United Methodist Church in Hutchinson.