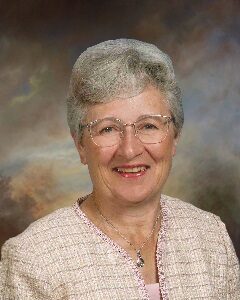 Funeral Service will be Thursday, January 21, 2021, 11:00 A.M. at First Evangelical Lutheran Church in Winthrop with interment in the Winthrop Cemetery.

Visitation will be one hour prior to the service at the church on Thursday.

Arleen Lois Martin was born on August 23, 1941, in Arlington, Minnesota. She was the daughter of Ralph and Viola (Dietzel) Comnick. Arleen was baptized as an infant and was later confirmed in her faith as a youth, both at St. Paul’s Lutheran Church in Arlington. She received her education in Arlington and was a graduate of the Arlington High School Class of 1959.

On August 27, 1966, Arleen was united in marriage to Ronald Martin at St. Paul’s Lutheran Church in Arlington. After their marriage, the couple resided on a farm near Winthrop. She was a loving homemaker, helped on the farm, and was the secretary at Green Giant in Le Sueur for many years. She was a caring and loving person who would do anything for anyone. Arleen and Ron shared 54 years of marriage.

Arleen was a member of First Evangelical Lutheran Church in Winthrop. She had a strong faith. She was a member of Bible Study and Bell Choir. She was also a member of the Sibley County Choral Society and helped with devotions at the Winthrop Good Samaritan Society.

Arleen loved to send cards to people and do Hardander embroidery. She cherished the time she spent with her extended family.

Arleen passed away on Friday, January 15, 2021, at Harmony River Living Center in Hutchinson at the age of 79. Blessed be her memory.

Arleen was preceded in death by her Parents, Ralph and Viola Comnick; Nephew, Bradley Swanson.