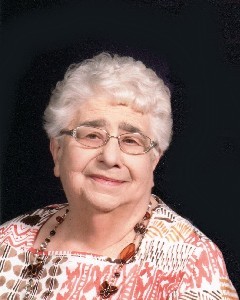 Arlene Gerardy, age 85, of Fairfax passed away Wednesday, April 22, 2015, at the Fairfax Community Home in Fairfax.

Mass of Christian Burial will be Monday, April 27th, 10:30 A.M. at St. Andrew’s Catholic Church in Fairfax with interment in the church cemetery.

Visitation will be Sunday, April 26th, from 4:00 P.M.-8:00 P.M. at St. Andrew’s Catholic Church in Fairfax. There will be a Prayer Service at 7:30 P.M. on Sunday. Visitation will continue one hour prior to the service at the church on Monday.

Arlene Mae (Traurig) Gerardy was born on July 15, 1929, in New Ulm, Minnesota. She was the daughter of Joseph and Laura (Berdan) Traurig. Arlene was baptized as an infant and was later confirmed in her faith. She received her education at District #53 and St. George Parochial School.

On June 7, 1949, Arlene was united in marriage to Sylvester Gerardy at St. George Catholic Church in St. George, Minnesota. After their marriage, the couple farmed in Cairo Township, Renville County. She had an active farm life including growing her large garden, taking care of the farm yard, helping with the dairy operation, raising chickens and preparing and carrying many lunches to the fields. In 1986, they moved into Fairfax where she was employed at the Fairfax Community Home in housekeeping. She was a loving mother and wife. This union was blessed with three children. Arlene and Sylvester shared 65 years of marriage.

Arlene was a member of St. Andrew’s Catholic Church in Fairfax, and the VFW Auxiliary #8459.

In 2013, the couple moved into the Assisted Living in Fairfax and on April 7, 2015, Arlene became a resident of the Fairfax Community Home and passed away there on Wednesday, April 22, 2015, at the age of 85 years. Blessed be her memory.

Arlene is survived by her: