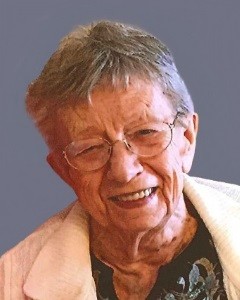 Arlene Minerva (Nelson) Meier Pearson was born on January 28, 1922, at her family home in Butternut Valley, Blue Earth County, Minnesota.  She was the daughter of Carl Arthur and Mabel Julia (Helleksen) Nelson.

Arlene moved from her hometown of Lake Crystal to Hector, Minnesota, in 1987.  She married Bernard (Bernie) Charles Pearson on August 26, 2000, at St. Paul’s Lutheran Church in Hector.  By this union, she was blessed his four children, Stephanie, Roger, Jeff, and Robyn. She always wanted more children, and thanks to Bernie, she was given four additional children to love.

Arlene was an enthusiastic member of her church in both Lake Crystal and later in Hector.  She was an active member of the Lutheran Daughters of the Reformation and later in Women of the ELCA.  She taught Sunday School, Vacation Bible School, and Confirmation classes.  She was 80 years old when she taught her last confirmation class.  She worked as a custodian at her church, and also at the local medical clinic.  She was also a sales clerk, church secretary, restaurant hostess, and teachers’ aide.  Arlene enjoyed people, especially children and young people.  She was a caregiver to both young and old.  She enjoyed life, particularly being with her family, entertaining family and friends, painting with watercolor, playing the piano, listening to music, watching “old” TV programs, and playing games – especially cards.

On Wednesday afternoon, July 22, 2015, Arlene passed away at the Buffalo Lake Healthcare Center, having reached the age of 93 years.  She was preceded in death by her grandparents, Sam and Ida Mathilda Helleksen and Ole and Karen Nelson, her parents, Arthur and Mabel Nelson, and husbands Melvin Meier and Bernie Pearson.

her daughter and husband, Angie and Rich Carlson of Hector;

other family members and many friends.

She will be greatly missed.  God bless her memory as He has blessed those who knew and loved her!