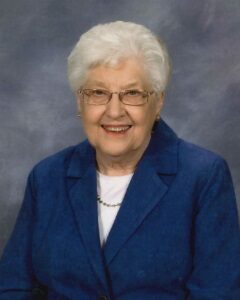 Arlyce Jean Drahos was born on December 9, 1932, in Runeburg Township, Minnesota. She was the daughter of Oscar and Alma (Flaata) Danielson. Arlyce was baptized as an infant on February 19, 1933, at First English Lutheran Church by Rev. O.N. Nelson in Menahga, Minnesota and was later confirmed in her faith as a youth on June 22, 1947 at Svea Lutheran Church by Rev. O.E. Turnquist in Svea, Minnesota. She was a graduate with the Willmar High School class of 1950. Arlyce furthered her education at Lutheran Bible Institute in Minneapolis, Minnesota for two years, graduating in 1952.

On April 27, 1957, Arlyce was united in marriage to Raymond Drahos at Svea Lutheran Church in Svea. This marriage was blessed with three children, James, Daniel, and Karen. Arlyce and Raymond resided in Hutchinson. They shared 51 years of marriage until the passing of Raymond on November 5, 2008.

Arlyce was employed at the State Bank of Blomkest from 1952 to 1957. She was then employed at Juul Contracting Company.

She was a member of Faith Lutheran Church in Hutchinson.

Arlyce passed away on Monday, May 18, 2020, at Ecumen Oaks in Hutchinson, at the age of 87 years. Blessed be her memory.

Arlyce is preceded in death by her Parents, Oscar and Alma Danielson and Husband, Raymond.