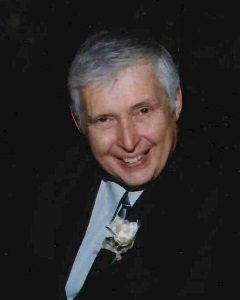 Funeral Service will be held on Saturday, June 15, 2019, at 10:00 A.M. at Bethlehem United Methodist Church in Hutchinson with interment in the Hegre Cemetery in Lake Shore Township, Minnesota.

Visitation will be held on Friday, June 14, 2019, from 5:00-8:00 P.M. at the Dobratz-Hantge Funeral Chapel in Hutchinson and will continue one hour prior to the service at Bethlehem United Methodist Church.

Arthur James Benjamin was born on June 13, 1936, in Hutchinson, Minnesota. He was the son of Arthur and Adella (Nemitz) Benjamin. He was baptized as an infant on November 1, 1936, at Vineyard United Methodist Church in Hutchinson and was later confirmed in his faith as a youth. Arthur received his education in Hutchinson and was a graduate of the Hutchinson High School class of 1954. He then furthered his education at St. Cloud Community College for two years and St. Cloud State University for two years, achieving a Bachelor’s Degree in Teaching.

On April 21, 2001, Arthur was united in marriage to Linda Bjorgan in Chokio, Minnesota. This marriage was blessed with one step-child, Jessica. Arthur and Linda resided in Hutchinson, Minnesota. They shared 18 years of marriage.

Arthur taught 5th Grade at Gaylord Elementary for five years. Most of his life, he was the owner and operator of G.F. Nemitz & Sons Paint Store until his retirement in 2015.

When Arthur needed assistance with his daily care, he became a resident of Augustana Lakeside Healthcare Center on April 24, 2019. He was passed away there on Tuesday, June 11, 2019. Blessed be his memory.

Arthur is survived by his:
Wife, Linda Benjamin of Hutchinson, MN;
Step-Daughter, Jessica Foley and her husband, Jonathan Foley, of Marshall, MN;
Sister, May Williams of Golden, Colorado;
Many other relatives and friends.