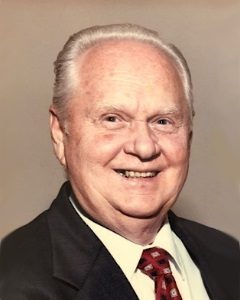 A Private Family Graveside Service will be held at a later date.

Arthur Naustdal, 89, of Hutchinson, Minnesota, passed away Tuesday, February 19, 2019, at St Mary’s Care Center in Winsted , Minnesota. He was diagnosed with an aggressive form of metastatic prostate cancer in November, 2018. He underwent chemo treatments but contracted pneumonia just a week before his death.

Arthur Naustdal was born April 30, 1929 in Minneapolis, MN to Reinhard and Oleanna Naustdal, He was their 3rd child out of 5. He attended grade school at Minneapolis Jr. Academy, a Christian day school. He met Gloria Kaminski, the love of his life, and soon they were married on November 27, 1948. They shared 61 years of marriage until the passing of Gloria on January 17, 2010.

He entered the military in the United States National Guard on January 16, 1951, in Minneapolis, Minnesota. He achieved the rank of Corporal Technician, and was honorably discharged on May 16, 1952, at Camp Rucker in Alabama.

Art and Gloria were blessed with two children, Bruce and Barbara.

Arthur was employed as a home builder for G&A Builders until his retirement in 2003. After his retirement , he worked for the Medicine Lake Bus Lines as a bus driver for special needs children in northern Minneapolis. He loved babies and little children. Every day he would come home with stories about the kids.

God had first priority in his household. Every day, there was prayer and family worship. They taught their children about how much God loves them and why they would want to love God in return.

Christian education for their children was another huge priority and they worked hard to put their children through Maplewood Academy and Union College. Even though Art had not finished high school, he did receive his GED in 2002.

Art was a very humble person. He never wanted to draw attention to himself in any way. He helped out in his church in every way he could as long as he stayed in the background. Generosity was also one of his character traits. He was never a wealthy person monetarily but he gave as if he were. He would help anyone who was in need. Honesty was another character trait. He always taught that it was better to have gotten the wrong end of the deal rather than to make a buck on someone else’s mistake.

Art was not known for having many hobbies. His joy came from being with his family; his wife, children, grandchildren and great grandchildren. He did , however, enjoyed watching the money markets; looking at new cars but rarely buying any; and of course babies and small children. He was always eager to hold a newborn in his arms or to talk with little children.