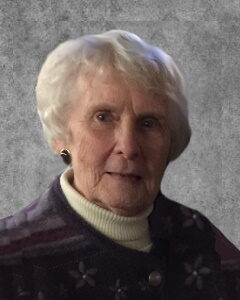 Memorial Service will be held on Monday, October 21, 2019, at 11:00 A.M. at Christ the King Lutheran Church in Hutchinson with interment at a later date.

Gathering of Family and Friends will be held on Sunday, October 20, 2019, from 4:00-6:00 P.M. at the Dobratz-Hantge Funeral Chapel in Hutchinson and will continue one hour prior to the service at the church.

On June 8, 1956, Audrey was united in marriage to Thoralf Skeie at Bethlehem Lutheran Church in Minneapolis, Minnesota. After her husband’s graduation from Luther Theological Seminary and upon his ordination into the Lutheran Ministry, they moved to their first parish, the Benson Rural Parish in Benson, Minnesota, from 1957 to 1961. In 1961, they moved to Madelia, Minnesota and lived there until 1968. At which time the family moved to Hutchinson, Minnesota, where her husband was a pastor at Faith Lutheran Church. This marriage was blessed with three children, Peter, Eric, and Kirsten. Audrey and Thor resided in Hutchinson, Minnesota. They shared 62 years of marriage.

Audrey worked for several years in Winsted, Minnesota at the Adult Habilitation Center and later as a Paraprofessional in the Hutchinson Public Schools. After retirement, she enjoyed volunteering at the West Elementary in Hutchinson. She also enjoyed attending many sporting and musical events of her grandchildren. Audrey was an avid Hutchinson Tigers, Minnesota Vikings, and Minnesota Twins fan. Audrey enjoyed spending summers at “The Good Eidea” lake cabin that has been in her family for 100 years. She loved sitting on the deck and watching the sunset over Walker Lake. In her younger years, she loved swimming, waterskiing, and bicycling.

Audrey passed away on Wednesday, October 9, 2019, at Harmony River Living Center in Hutchinson, at the age of 90 years. Blessed be her memory.

Interment for Audrey Skeie will be at a later date in the Amor Lutheran Cemetery, Ottertail County, Minnesota.