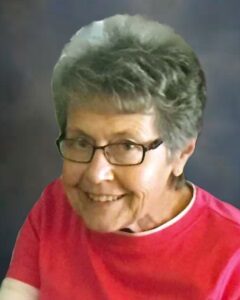 Barbara “Barb” Sylvia Johnson was born on December 27, 1947, in Hector, Minnesota. She was the daughter of Roy and LuVern (Koelln) Lange. Barb was baptized as an infant and was later confirmed in her faith as a youth both at First Evangelical Lutheran Church in Hector. She was a graduate of the Hector High School Class of 1965.

On April 16, 1966, Barb was united in marriage to Alford “Chris” Johnson at First Evangelical Lutheran Church in Hector. This marriage was blessed with one daughter, Stephanie. Barb and Chris resided in Germany, Mountain Home, Idaho, Hector, Chisago City, and Two Harbors, Minnesota, then moved back to Hector for 20 years. After retiring in 2009 they moved to Hutchinson. Barb and Chris shared 54 years of marriage.

Barb was employed at various Telephone Companies. After retiring from the Telephone Industries she had an opportunity to move back to Hector and work for the city as the Hector City Deputy clerk for 20 years until retiring in 2013.

She was a lifelong member of First Evangelical Lutheran Church in Hector.

Barb enjoyed flower and vegetable gardening. She also enjoyed camping in her younger years, riding motor cycle with her husband, attending antique tractor shows, and threshing shows. Barb was an excellent cook and her signature recipe was her banana bread. She cherished spending time with her family, friends and especially her precious grandson, Alex.

Barb is survived by her:
Husband, Chris Johnson of Hutchinson, MN;
Daughter, Stephanie Ahlbrecht and her husband, Craig, of Waterville, MN;
Grandson, Alex Ahlbrecht;
Neices, Nephews, many other relatives and friends

Barb is preceded in death by her Parents, Roy and LuVern Lange; Brothers, Arvid Lange and Kenny Lange; and Sister, Ruth Allen.