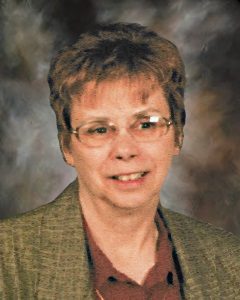 Gathering of family and friends will be held from 10:00 A.M. to 11:00 A.M., one hour prior to the service, at St. John’s Evangelical Lutheran Church.

Barbara “Bobbie” Jean Heidemann was born on July 29, 1946, in Bush Lake, Minnesota. She was the daughter of Ralph and Virginia (Johnston) Gilbert. Bobbie received her education in Eden Prairie, Minnesota and was a graduate of the Eden Prairie High School Class of 1964.

On March 5, 1966, Bobbie was united in marriage to Delbert Heidemann in Bloomington, Minnesota. The couple resided in Eden Prairie, Savage, Shakopee, and East Union, Minnesota before making their permanent residence in Plato, Minnesota in 2006. They were blessed with one daughter, Holly. Bobbie and Delbert shared 53 years of marriage together.

Bobbie’s career path started first as a Certified Solderer for Apollo Missions with NASA at Magnetic Controls in St. Louis Park, Minnesota. She then held a career in accounting at National Car Rental in Edina, Minnesota. Bobbie’s next job was at Continental Machines in Savage, Minnesota where she worked on machines for ticker tape before computers. She then began working at Braun’s Fashions in Eden Prairie, Minnesota in the accountant and payroll department. Bobbie’s final place of employment was at Birchwood Laboratories in Eden Prairie also in the accountant and payroll area where she worked for 16 years until she retired in September of 2006.

Bobbie was an avid reader and loved reading mystery and detective books. She was also very interested in ancestry and family trees. Bobbie enjoyed working in her flower gardens and helping with yard work. Her greatest enjoyment was quilting in which she had as a hobby since 1970. She also cherished the time that she spent with her family and friends.

Bobbie passed away on Wednesday, July 24, 2019, at Friendship Manor in Shakopee, at the age of 72 years. Blessed be her memory.