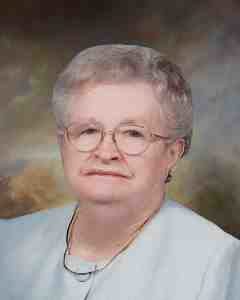 Funeral Service will be Sunday, August 4, 2019, 1:00 P.M. at St. Paul’s Lutheran Church in Gaylord with interment in the church cemetery.

Visitation will be Sunday, August 4, 2019, one hour prior to the service at the church.

Bernice Amelia Bierstedt was born on October 24, 1922, in Winthrop, Minnesota. She was the daughter of Herman and Martha (Witt) Schultz. Bernice was baptized as an infant and was later confirmed in her faith as a youth. She received her education at a rural country school near Winthrop through the sixth grade.

On March 28, 1946, Bernice was united in marriage to Harold Bierstedt at the Immanuel Lutheran Church Parsonage in New Auburn. After their marriage, the couple farmed in Sibley Township on the Bierstedt family farm. This union was blessed with two daughters. She was a loving mother and homemaker. In 1979 they moved into Gaylord. Bernice and Harold shared 59 years of marriage when Harold passed away on December 7, 2005.

Bernice was a member of St. Paul’s Lutheran Church in Gaylord and a member of the Ladies Aid.

Bernice enjoyed vegetable and flower gardening, sewing, and embroidering. She cherished the time she spent with her family, especially her children, grandchildren and great grandchildren.

When she needed assistance with her daily care, Bernice became a resident of Heritage House and later Oak Terrace Health Care Center on October 16, 2007, and passed away there on Thursday, August 1, 2019, at the age of 96 years. Blessed be her memory.