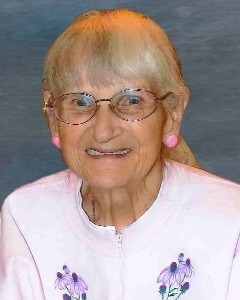 Memorial Services will be Friday at 11:00 A.M., at the Dobratz-Hantge Funeral Chapel in Hutchinson with interment in the Oakland Cemetery in Hutchinson.

Gathering of Family and Friends will be Thursday 5:00-7:00 P.M. and will continue one hour prior to the service ALL at the funeral chapel.

Betty Anne Johnson was born on January 29, 1939, in Olivia, Renville County, Minnesota. She was the daughter of Harlan and Bessie (Jakes) Schiebel. Betty Anne was baptized as an infant, and was later confirmed in her faith as a youth, both at Vineyard United Methodist Church in Hutchinson, Minnesota. She received her education in Hutchinson, and was a graduate of the Hutchinson High School Class of 1957.

On November 30, 1957, Betty Anne was united in marriage to Myron Johnson at Vineyard United Methodist Church in Hutchinson. This marriage was blessed with three children, Chris, Craig and Cheryl. Betty Anne and Myron resided in Hutchinson. They shared 54 years of marriage until Myron passed away on May 24, 2012.

Betty Anne enjoyed ceramics, crocheting, playing bingo, tending to her gardens, arranging flowers and collecting loons. She loved going to the lake, where she enjoyed watching the loons and fishing. Betty loved riding in convertibles and was also the social butterfly at Harmony River Living Center. She especially cherished spending time with her family, grandchildren, great grandchildren and friends.

When Betty Anne needed assistance with her daily care she became a resident of Harmony River Living Center in Hutchinson, Minnesota on July 28, 2008. She passed away there on Sunday, January 31, 2016, at the age of 77 years.