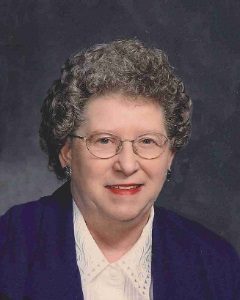 Visitation will be held Friday, February 1, 2019, from 5:00-8:00 P.M. at the Johnson-McBride Funeral Chapel in Glencoe, Minnesota, and will continue one hour prior to the service at the church on Saturday.

Carol Eunice (Engelmann) Brelje was born on January 26, 1934, in Helen Township, McLeod County, Minnesota. She was the daughter of Herbert and Eldora (Boesche) Engelmann. Carol was baptized as an infant on February 11, 1934, at St. John’s Lutheran Church in Plato, Minnesota, and was later confirmed in her faith as a youth on March 30, 1947, at First Evangelical Lutheran Church in Glencoe, Minnesota. She received her education in Plato at St. John’s Parochial School through the second grade, District #19 Country School in Bergen Township through the eighth grade and then attended the Glencoe High School. She grew up on the family farm.

On July 12, 1955, Carol was united in marriage to Lowell Brelje at First Evangelical Lutheran Church in Glencoe. After their marriage, the couple resided south of Brownton in Penn Township and then moved to Glencoe in 2006. She was employed at Jensen’s Locker Plant near Glencoe in her younger years. Carol and Lowell were blessed with three children, Debra, La Vern, and Theresa. They shared 63 years of marriage.

Carol passed away on Monday, January 28, 2019, at Harmony River Living Center in Hutchinson, Minnesota, at the age of 85 years, and 2 days.