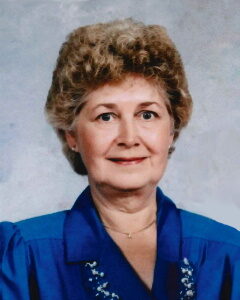 Carol E. Grove, age 84, of Prior Lake, Minnesota, formerly of Hutchinson, Minnesota, passed away on Monday, September 30, 2019, at McKenna Crossing in Prior Lake.

Memorial Service will be held on Saturday, November 9, 2019, at 2:00 P.M. at Dobratz-Hantge Funeral Chapel in Hutchinson with interment in the Oakland Cemetery in Hutchinson.

Carol Ellen Grove was born on April 5, 1935, in Hutchinson, Minnesota. She was the daughter of Clarence and Emma (Denison) Nelson. Carol attended Hutchinson schools through 11th grade when she transferred to Minneapolis School of Business to finish her education.

Carol was working in Minneapolis when she met her husband Gail Grove. Carol and Gail were married at Vineyard United Methodist Church on October 16th, 1955, moving to Plover, Iowa the first years of their marriage returning to Hutchinson in 1960. The marriage was blessed with three children Lisa, Mitchell, and Kyle. Carol and Gail enjoyed retirement having many wonderful adventures traveling to several countries in Europe, Asia, Australia, New Zealand, and the Caribbean Islands. They enjoyed many winters as “snowbirds” at their home in Mesa Arizona.

Carol was a loving wife, mother, and grandmother with a wonderful sense of humor, who was known for her quick wit and clever pranks.

Carol was preceded in death by her Parents, Clarence and Emma Nelson and Granddaughter, Star Johnson.