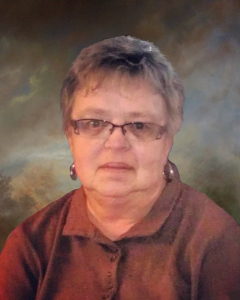 Memorial Service will be held on Tuesday, October 15, 2019, at 11:00 A.M. at Dobratz-Hantge Funeral Chapel in Hutchinson with interment in the Oakland Cemetery in Hutchinson.

Gathering of Family and Friends will be held on Monday, October 14, 2019, from 4:00-7:00 P.M. at the funeral chapel and will continue one hour prior to the service at the funeral home on Tuesday.

On January 18, 1969, Diane was united in marriage to Richard Anderson at Ebenezer Lutheran Church in Kandiyohi. This marriage was blessed with two children, Melissa and Matthew. Diane and Richard have resided in Hutchinson since 1969. They shared 50 years of marriage together.

Diane was employed as a florist at Carr Flowers and Greenbrier. Diane was a member of the Ladies Auxiliary Unit 96 in Hutchinson.

Diane passed away on Wednesday, October 9, 2019, at Hutchinson Health Hospital in Hutchinson at the age of 70 years.

Diane is survived by her:
Husband, Richard Anderson of Hutchinson, MN;
Children, Melissa Conn of Hutchinson, MN,
Matthew Anderson and his wife, Tommy, of Hutchinson, MN;
Grandchildren, Kendall Conn, Alex Anderson, Haley Anderson, and Megan Anderson;
Sisters, Lynette Carrigan and her husband, Jim, of Biscay, MN,
Kim Hoeper and her significant other, Rodney Hight, of Atwater, MN;
Many other relatives and friends.

Diane is preceded in death by her Parents, Fredrick and Lenore Bengtson and Brother-in-law, Jack Hoeper.