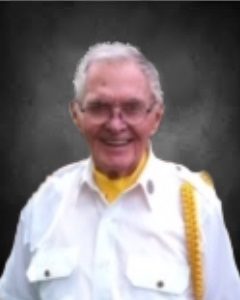 Gathering of Family & Friends will be held Friday, June 14, 2019, from 5:00-7:00 P.M. at Christ Lutheran Church in Glencoe, Minnesota. A prayer service will be at 6:30 P.M. Gathering will continue one hour prior the service at the church on Saturday.

Donald Cyril Tifft was born on November 8, 1924, in McLeod County, Glencoe, Minnesota. He was the son of Samuel Lowell and Edna Christine (Nelsen) Tifft. Donald was baptized as an infant and later was confirmed in his faith as a youth, both at the First Congregation United Church of Christ in Glencoe, Minnesota. He received his education in Glencoe, Minnesota, graduating from Steven’s Seminary with the Class of 1942. Donald enlisted in the United States Army Air Corp. on June 2, 1943, and was stationed at Holloman Air Force Base in New Mexico. He was a mechanic on the B-29 fourth engine. Donald received an Honorable Discharge in 1946. He furthered his education by attending his first year of college at St. Cloud State and then transferred to the University of Minnesota where he graduated with a business degree in 1950.

Donald met Janice Bomm at Lake Marion ballroom and they were united in marriage on May 26, 1949, in Minneapolis, Minnesota. Their marriage was blessed with four children, Patti, Douglas, Kerri and David. Donald and Janice were together four months short of 70 years.

After graduating, Don entered the management training program with Gambles Skogmo. During this time they moved many times. After being with Gambles a few years, Don became a buyer and worked for various companies. He was a wholesale buyer of household goods, sporting goods and toys. In 1966, Don moved his family to his hometown of Glencoe. At this time an opportunity came to him to go into another line of business altogether. Don became an insurance agent and real estate agent working with the Hartelt Agency until retirement. He was a member of Christ Lutheran Church in Glencoe. Don was also a member of the Masonic Lodge and the Glencoe American Legion Post #95.

Don always looked forward to family get togethers and any kind of adventure. Camping trips and his Glastron boat never disappointed in providing family bonding moments. Don and Janice took several winter trips and a trip to Hawaii after retirement. Christmas was always at their house up until they moved into Grand Meadows. Don had a love for many sports including Twins baseball in the summer and Viking games in the fall. He had a unique talent for multitasking fall chores while watching a Vikings game and not missing a second of the game. Don had only played one game of golf before moving to Glencoe. It would become a game he enjoyed playing.

Donald passed away Friday, January 18, 2019, at Grand Meadows Senior Living in Glencoe, Minnesota, at the age of 94 years, 2 months and 10 days. Blessed be his memory.

Donald is preceded in death by his Parents, Samuel and Edna Tifft; Brother, Lowell Tifft and his wife, Maureen.