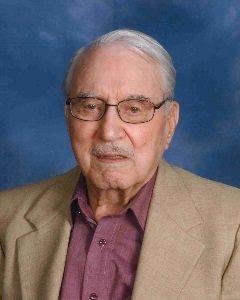 Memorial Service will be held Thursday, June 13, 2019, at 4:00 P.M., at Dobratz-Hantge Funeral Chapel in Hutchinson with interment in Oakland Cemetery in Hutchinson.

Gathering of Family and Friends will be held one hour prior to the service at the Funeral Chapel.

Donald Joseph Fitzgerald was born on June 19, 1922, in Slayton, Minnesota. He was the son of Frank and Regina (Kearns) Fitzgerald. Donald was baptized as an infant and was later confirmed in his faith as a youth. He received his education in Hutchinson and was a graduate of Hutchinson High School, with the class of 1940.

Donald was inducted into the United States Army on October 6, 1942. He entered active service on October 29, 1942, at Fort Snelling in Minneapolis, Minnesota. He received the Philippine Liberation Ribbon with two bronze stars, the Asiatic Pacific Theater Ribbon, the Good Conduct Medal, and a Meritorious Unit Award. He was honorably discharged on December 19, 1945, at Camp McCoy, Wisconsin as a TEC4.

On December 2, 1966, Donald was united in marriage to Yvonne Peterson at the Little Chapel in South Dakota. Yvonne and Donald resided in Hutchinson. They also resided in Florida for several years, where they managed a Days Inn and a private motel. Donald and Yvonne had shared 41 years of marriage when Yvonne passed on May 21, 2008.

Donald enjoyed hunting and fishing. He also enjoyed traveling in the RV with his wife, Yvonne. He especially enjoyed spending time with his grandchildren, great-grandchildren, family, and friends.

Donald passed away on June 5, 2019, at Woodstone Senior Living Center in Hutchinson, at the age of 96 years.