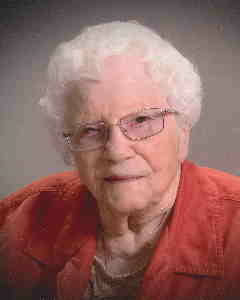 Donna Hahn entered her eternal rest on Tuesday, March 31, 2020, at Oak Terrace Health Care Center in Gaylord, Minnesota, at the age of 90.

Madonna Jeanetta Myra (Kloempken) Hahn was born on July 6, 1929, in New Auburn Township, Minnesota, to John and Margaret (Weckop) Kloempken. She was baptized and confirmed in the Catholic faith. In 1946, she was confirmed at Immanuel Lutheran Church in Gaylord. She attended country school in Sibley County.

On October 4, 1946, Donna was united in marriage to Ellwsorth Hahn by Reverend Stahlke at Immanuel Lutheran Church in Gaylord. The couple was blessed with two sons, Larry and Allen. The couple resided north of Gaylord and farmed until 1982, when they moved into Gaylord. She was a loving wife, mother, grandmother and homemaker. Donna and Ellsworth shared 57 years of marriage when Ellsworth passed away on November 17, 2003.

Donna was a member of Immanuel Lutheran Church in Gaylord.

When she needed assistance with her care, Donna became a resident of Oak Terrace Health Care Center in Gaylord and passed away there on Tuesday, March 31, 2020, at the age of 90 years. Blessed be her memory.