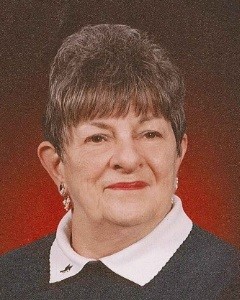 Private Family Service will be held Saturday, October 10, 2015, at 2:00 P.M. at the Hughes-Hantge Funeral Chapel in Hector.

Public Visitation will be held for one hour prior to the service, from 1:00 – 2:00 P.M., on Saturday at the Hughes-Hantge Funeral Chapel in Hector.

Interment will be held in the Bird Island City Cemetery.

Donna was married to Dennis Ulrich in 1958, but the marriage was later dissolved.  On July 31, 1965, Donna was united in marriage to Thomas Koopman in Waite Park.  They made their home in Buffalo Lake.  Donna worked at Green Giant during the summers, and was employed with 3M.  She was then employed at the Buffalo Lake Healthcare Center for 25 years as a nurse aide.

Donna appreciated the work of the Heart of Minnesota Animal Shelter, and would volunteer her time there.  She was very crafty, and enjoyed scrapbooking, making greeting cards, and sewing.  She liked to go fishing, and watch fireworks.

This past August Donna was hospitalized at the Hutchinson Hospital, being discharged to the Buffalo Lake Healthcare Center on September 28.  On Wednesday afternoon, October 7, 2015, she passed away there, having reached the age of 77 years, 10 months, 15 days.  Blessed be her memory.

Donna was preceded in death by her parents, Harry and Ruth Ahlbrecht.