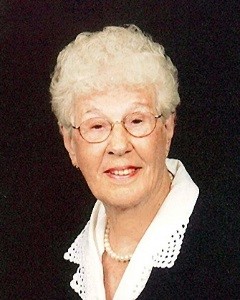 St. John’s Catholic Church in Hector, with interment in the church cemetery.

Visitation will be Sunday from 5:00 PM until 8:00 PM at the Hughes-Hantge Funeral Chapel in Hector, and will continue for one hour prior to the service at the church on Monday.

On October 18, 1941, Dorothy married Alexander M. Specht who was stationed in St. John’s during WWII.  They welcomed two children while in Newfoundland, Caroline and Michael.  Just before the war ended, Dorothy and the kids joined Alex’s folks in Bird Island, Minnesota.  When Alex returned from duty, he and Dorothy farmed near Buffalo Lake for a time, and eventually moved to Hector.  Dorothy did cleaning for several years until she became employed by Our Own Hardware, where she worked until she retired.

Dorothy has been a member at St. John’s Catholic Church since moving to the states.  She was involved in the Altar Society for several years and, up until recently, still helped with church candles.

On Friday evening, March 13, 2015, Dorothy passed away at the Buffalo Lake Healthcare Center, having reached the age of 95 years, 10 months, 9 days.  Blessed be her memory.

Dorothy was preceded in death by her parents, husband Alex, son Shawn, and her siblings.