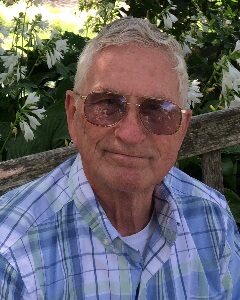 Private Family Service will be held at the Paul-McBride Funeral Chapel in Norwood Young America, Minnesota, with a private family interment at a later date at Evergreen Cemetery in Big Falls, Minnesota.

Duane Hugh Dudgeon was born on May 10, 1938, in Koochicing County, Littlefork, Minnesota. He was the son of Rolland Francis and Viola Leona (Larson) Dudgeon. Duane was confirmed in his faith at Big Falls Covenant Church and baptized later. He received his education in Littlefork, Minnesota, and graduated with the Big Falls High School Class of 1957.

Duane enlisted in the United States Air Force on August 2, 1957, in Fargo, North Dakota. He took his basic training at Lackland Air Force Base in Texas. Duane then spent the next four years at Travis Air Force Base in Fairfield, California. He was a part of 1501st Air Base Group. Duane was a storage, hydrant, and refueling unit operator. He refueled both military and commercial airplanes, C124 and C97 Cargo Planes and B52 Bombers. He received a special commendation from General Donaldson for the excellent servicing of the General’s airplane in 1959 and the Good Conduct Medal on August 1, 1960. During his tour of duty, he went TDY for 3 weeks to Remy Air Force Base at San Juan, Puerto Rico. It was the only time he flew in an airplane while in the Air Force. He flew in a C124 Cargo Master and a C121 to and from Puerto Rico. Duane was honorably discharged on August 1, 1961, at Travis AFB Fairfield in California, having achieved the rank of E-4.

After the service, Duane furthered his education at Globe Business College for Data Processing. He then worked for 6 years in St. Paul, Minnesota for the Gould National Battery Company. He operated the sorter, collator, printer, machines, and computers.

On June 1, 1962, Duane was united in marriage to Jean Karen Gowdy in Big Falls, Minnesota. This marriage was blessed with three children, Karen, Paul, and Rena. Duane and Jean resided in Norwood Young America. They shared 57 years of marriage.

On December 18, 1967, he began working in the United States Postal System, he delivered mail in Minneapolis, Minnesota and Portland, Oregon. He worked for 25 years before he retired in 1992. Duane then went back to college for two and half years at Minneapolis Technical College to become an electrician. Later on, he began working for Musicland in the Administrative Assistant department. Musicland turned out to be a favorite job for him. He met many up and coming singers, received lots of music and worked with the best group of people.

Duane was a member of Elim Covenant and later Edina Covenant Church for twenty-five years. At Elim, he helped with the Wednesday night soup and sandwich suppers for three years and worked with “Boys Brigade”. He was assistant head usher for 13 years at Edina Convenant and helped serve suppers with “Loaves & Fishes”.

Duane loved music of all kinds, country western, cajun, bluegrass, gospel, and rock and roll. He spent many hours listening to his music collection of old vinyl records and CDs. He enjoyed spending time with his grandchildren and family. Duane’s hobbies were camping, canoeing, and partridge hunting. His best childhood memories were growing up in Big Falls with childhood friends, Peter Bovold, Bob Van Slyke, Don Cody, Terry Dougherty, Ernie Gates, and brother, Leon. They did fun things like rabbit and partridge hunting, swimming in the channel, skipping school, and sneaking beer from the Gate’s Bar. They even painted Gate’s dog green!