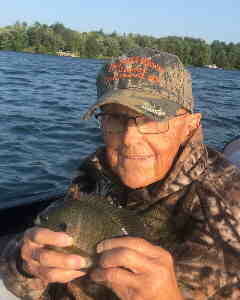 Edwin Frauendienst, age 87, of New Auburn passed away surrounded by his family on Thursday, November 28, 2019, at his home in New Auburn.

Visitation will be Monday, December 2, 2019, from 4:00 P.M.-7:00 P.M. at the Egesdal Funeral Home in Gaylord and will continue one hour prior to the service at the church on Tuesday.

Edwin Robert Frauendienst was born on May 29, 1932, in New Auburn Township, Sibley County, Minnesota. He was the son of John and Ida (Grewe) Frauendienst. Edwin was baptized as an infant on June 12, 1932, and was later confirmed in his faith as a youth on April 14, 1946, both at St. John’s Lutheran Church, Mountville, Dryden Township, Sibley County, Minnesota. He received is education at St. John’s Parochial School, Mountville. Edwin grew up on the family farm before moving to New Auburn.

On August 27, 1966, Edwin was united in marriage to Mavis Harbarth at First Lutheran Church in Glencoe. After their marriage, the couple resided in New Auburn. Edwin and Mavis were blessed with three children. Edwin worked for various farmers shelling corn and working on farms. Edwin was also employed at Glencoe Manufacturing and Hands, Inc. in Winthrop. Edwin and Mavis shared 51 years of marriage when Mavis passed away on May 13, 2018.

Edwin was a member of Immanuel Lutheran Church in New Auburn.

Edwin passed away on Thursday, November 28, 2019, at his home johnsurrounded by his family at the age of 87 years. Blessed be his memory.