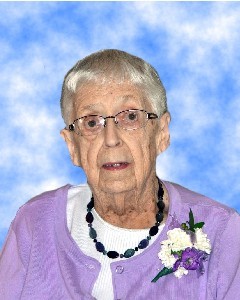 Funeral Service will be Wednesday, April 1st, 11:00 A.M. at Immanuel Lutheran Church in Gaylord with interment in the church cemetery.

Visitation will be from 9:00 A.M. until the time of service at the church on Wednesday. Arrangements are with the Egesdal Funeral Home in Gaylord.

Elaine Marguerite (Winter) Franke was born on August 20, 1924, in New Auburn Township, Sibley County, Minnesota. She was the daughter of Henry and Elizabeth (Ehrenberg) Winter. Elaine was baptized as an infant at First Lutheran Church in Glencoe by Reverend Kolbe and was later confirmed in her faith as a youth. She received her education in Winthrop and was a graduate of the Winthrop High School Class of 1942.

On February 11, 1945, Elaine was united in marriage to Clarence Franke at Zion Evangelical Lutheran Church in Winthrop. This marriage was blessed with six children. After their marriage, the couple farmed for many years in Sibley County. Elaine and Clarence owned and operated Franke’s Café in Gaylord as well as worked at Fingerhut Corporation. Elaine and Clarence moved into Gaylord in the 70’s. They shared 60 years of marriage before Clarence passed away on December 15, 2005.

Elaine was a member of Immanuel Lutheran Church in Gaylord.

When she needed assistance with her daily care in the last few months, Elaine became a resident of Oak Terrace Health Care Center and passed away on Saturday, March 28, 2015, at the Ridgeview Sibley Medical Center in Arlington at the age of 90 years. Blessed be her memory.

Elaine is survived by her:
Children, Norman Franke and his wife, Bonnie of Brainerd, MN,
Mary Blaha and her husband, Richard of Le Sueur, MN,
Cheryl Brouwer of Monticello, MN,
Barbara Hoffman and her husband, Dave of Le Sueur, MN,
John Franke of Gaylord, MN, and
Roger Franke and his wife, Cindy of Kasson, MN;
10 Grandchildren;
18 Great-Grandchildren;
Sister-In-Law, Helen Franke;
Nieces, Nephews, other relatives and friends.