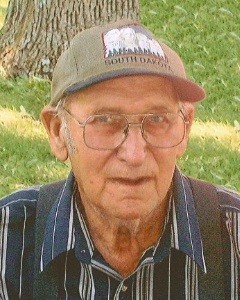 Interment in the First Evangelical Lutheran Cemetery in Cosmos Township.

Visitation will be Sunday for two hours prior to the Service, from 1:00 – 3:00 P.M., at Peace Lutheran Church in Cosmos.

Ervil Martin Hopp was born September 6, 1924, in Sherman Township, Redwood County, Minnesota, the son of Anton and Olga (Steinhaus) Hopp.  He was baptized at St. John’s Lutheran Church in Morgan, and confirmed in his faith there on April 2, 1939.  Ervil attended country school.

On February 9, 1945, Ervil was united in marriage to Hildegard Borchert at the Zion Lutheran Church in Winthrop, Minnesota.  They lived with his parents for a while, and then in Morton and Bird Island. Ervil worked with [Emil Boelter?] Construction out of New Ulm.  In 1970, Ervil and Hildegard and their family moved to their farm in Danielson Township near Cosmos and Atwater.  Ervil truly enjoyed farming, raising crops and managing his dairy operation. He retired from farming, but continued to live on the farm.  Ervil and Hildegard had shared nearly 57 years of marriage when Hildegard passed away on December 26, 2001.

Ervil was a member of First Evangelical Lutheran Church in Cosmos.  He enjoyed fishing and gardening.  He was good at making sauerkraut from his garden cabbage.  Ervil spent three years at Ecumen of Litchfield, and instinctively helped by watching out for the other residents.

Early Friday morning, July 17, 2015, Ervil passed away at his farm home in Danielson Township, having reached the age of 90 years.  Blessed be his memory.

Ervil is survived by his Children and their Families:

many Nieces and Nephews;

Family and Friends at Ecumen of Litchfield;

Ervil was preceded in death by his parents, wife Hildegard, son-in-law Lee Guggisberg, great-granddaughter Christine Maddock, and his 15 siblings and their spouses.