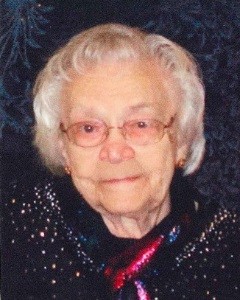 Funeral Service will be held Saturday, May 3, 2014, at 11:00 A.M. at St. Paul’s Lutheran Church in Stewart, with interment in the church cemetery.

On November 3, 1948, Esther was united in marriage to Lester Grams at St. Paul’s Lutheran Church in Stewart by Rev. M. A. Schultz.  They made their home in Grafton Township, Sibley County, and were engaged in farming.  In 1970 they purchased the farm across the road from their home, and in 1993 they purchased their home on Powers Street and moved to Stewart.  Esther continued to live there after Lester passed away on August 11, 2002.  For the past seven years, Esther made her home at The Pines in Hutchinson, and spent the last two months of her life at Harmony River in Hutchinson.

Esther enjoyed her life as a homemaker and farm wife.  She also did seasonal work at Green Giant for several years.  An active member of St. Paul’s Lutheran Church in Stewart, she taught Sunday School and Junior Lutherans.  She served as A.L.C.W. President for 45 years.  She chaired the Fall bazaar many years.   Her sour cream raisin pie was often sold before she even carried it downstairs.  Esther was also involved in E.C.F.E. Tiny Tots.  She loved gardening and cooking.  Whenever there was a family function in the Stewart area, Esther and her sister, Ruth, were the “go to” people for their famous potato salad, chicken salad, and cake.  Esther loved her children and grandchildren, and enjoyed spending time with them.

Esther and Lester enjoyed travel and music.    Several dates before they married included drives to Minneapolis to see stage musicals: Showboat and Oklahoma.  They traveled by car to California for their honeymoon, after fall crops were in, of course.   After retirement, they traveled to see Mark in various locations, Ohio, and Arizona.   They also traveled to Washington, DC and Hawaii, always interested in viewing crops and seeing new types of flowers and plants.   They attended a Pavarotti concert at Orchestra Hall that was a highlight of the year for her.