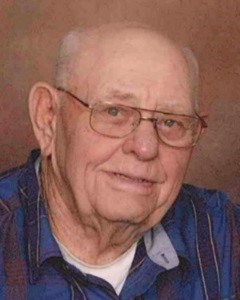 Funeral Service will be Saturday, December 12, 2015, at 12:00 P.M. at Peace Lutheran Church in Cosmos, with interment in the Church Cemetery.

Eugene Robert Dallmann was born July 19, 1930, in Cosmos, Minnesota, the son of Robert and Alice (Bulau) Dallmann. He was baptized on August 19, 1930 at Peace Lutheran Church in Cosmos, and confirmed in his faith there on May 7, 1944. Eugene grew up in Cosmos where he received his education through the 8th grade.

On April 29, 1960, Eugene was united in marriage to Luceil Reinke at Peace Lutheran Church in Cosmos. Their marriage was blessed with two sons, Mark and Bradley. Gene and Lucy made their home in East Lake Lillian Township southeast of Lake Lillian where they raised their family and farmed. Eugene had a great passion for picking corn. In 1983, Eugene bought Menton Oil Company and later was sold to Union Co-op Oil of Hector. In 1989, Eugene retired from the farm to Cosmos where he resided until his death.

Eugene was a member of Peace Lutheran Church in Cosmos throughout his lifetime. His hobbies included fishing, woodworking, and playing cards. He enjoyed spending time with his family and friends, especially attending each and every one of his granddaughters’ high school sporting events.

Late Tuesday afternoon, December 8, 2015, Eugene passed away at Cedar Crest of Cosmos, having reached the age of 85 years. Blessed be his memory.

Eugene is survived by his:

Other relatives, and many friends.

Eugene was preceded in death by his Parents, Robert and Alice, Sister, Stella (Ben) Zollner, and his Brother, Arnold (Irma) Dallmann.