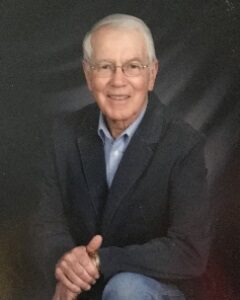 Private Service will be held.

Everett Leslie Young, Jr. (Les) was born in Gaylord, Minnesota. He was raised as a farm boy and attended country school in Sibley County before moving to New Ulm for high school. The family still spent summers on the farm, and his jobs included survey work in the fields. He loved being on country roads. Les attended the University of Minnesota and received his degree in chemical engineering. He was a member of the Delta Chi fraternity and lived in the house with other engineering students who became his lifelong friends. He met a young woman in the dental hygiene program during his university days.

Les and Joyce Ann Kurth were married in 1962. Their first home together was in St. Louis Park, while Joyce completed her degree at the University and Les commuted to Hutchinson, where he began work at the 3M plant. They eventually bought a small house on Pishney Lane in Hutchinson. After a few years in town and the addition of two sons, the family moved to a ten-acre parcel in the country. They dubbed it the Square X Ranch, built a house and planted trees along the perimeter. They raised cattle for a number of years, along with horses, cats, and dogs, with a few chickens in the mix. He got a real tractor and farmed 80 acres in Sibley County, earning him the title of farmer, even as his career at 3M advanced from engineer to product manager. He worked for a few years in the company headquarters in St. Paul, keeping the home in Hutchinson and commuting most days so the family could stay put. His travel for 3M took him around the world, to Asia and Europe, and he remained in contact with friends in many countries. He became increasingly involved at Peace Lutheran Church over the years, serving as the president of the congregation, leading projects and planning groups, as well as providing a steady source of good counsel to pastors, staff, and members of the church. He became active in faith-based groups that served the community. In retirement, he enjoyed spending time “up at the lake” with family, especially his grandchildren, and formed another community of friends in Walker. He was a lover of watercolor art and guitar music, an avid runner, and progressive thinker about land conservation and farming.