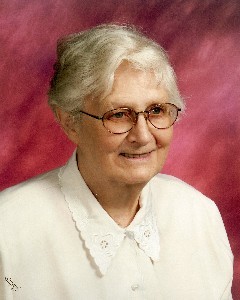 Funeral Service will be Saturday, March 21st, 2:00 P.M. at St. Luke’s Lutheran Church in Franklin with interment in the Franklin Cemetery.

Visitation will be Friday, March 20th, from 5:00 P.M.-8:00 P.M. at St. Luke’s Lutheran Church in Franklin. Visitation will continue one hour prior to the service at the church on Saturday. Arrangements are with the Hauser-Hantge Funeral Chapel in Fairfax.

Florence Jean (Wertz) Kanne was born on March 30, 1927, in Chadron, Nebraska. She was the daughter of Charles and Luella (Andrews) Wertz. Florence received her education in Chadron, Nebraska, and at the age of 16 was a 1943 graduate of Chadron High School. She started college in 1944 and graduated from Chadron Normal School in 1945. Florence continued her education at Moorhead State earning her four degree in 1966 with degrees in English, Library Science, and Secondary Education.

Florence grew up in in Chadron, Nebraska, and raised her family in Ortonville, Minnesota. Her first job was teaching in a one room school in Aurora, Colorado. She taught in various schools around the Ortonville area. Orval and Florence bought a farm near Franklin, as she was teaching in Gibbon, where she retired in 1982. Florence’s final residence was at Johnson Park Place with her best friend, Beau the cat.

Florence was a member of St. Luke’s Lutheran Church in Franklin.

Florence enjoyed quilting, gardening, reading, and learning. She was a great cook and a master of multi-tasking. Florence enjoyed playing Scrabble and spending time with loved ones. She was always learning and teaching until the end. Florence was kind hearted and liked to help others.

Florence passed away on Monday, March 16, 2015, at the Redwood Area Hospital in Redwood Falls, Minnesota, at the age 87 years. She will be remembered lovingly.