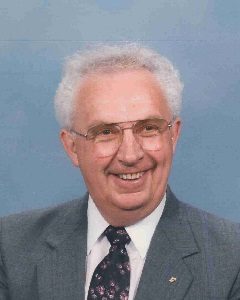 Funeral Service will be held on Tuesday, February 5, 2019, at 10:30 A.M. at Christ the King Lutheran Church in Hutchinson with interment in Oakland Cemetery in Hutchinson.

Visitation will be held on Monday, February 4, 2019, from 5:00-8:00 P.M. at Dobratz-Hantge Funeral Chapel in Hutchinson and will continue one hour prior to the service at the church.

In 1949, Frank was united in marriage to Lillian Erickson. This marriage was blessed with four daughters, Becky, Colleen, Cheryl and Kathy.

Frank began his professional career in feed sales. He and his family moved to Hutchinson in 1965, where he started working at Harvester Silo. In 1967, Frank started his career as a self-employed realtor in Hutchinson for many years. He was a member of Christ the King Lutheran Church in Hutchinson.

Frank enjoyed hunting, golfing, sports and traveling. He was very active in the Hutchinson American Legion Post 96; where he served as Post Commander in 1974-1975. He also held the position of State Commander of the American Legion in 1980-1981 and enjoyed his time with the King Tuts. Frank was very involved in the Midwest Kidney Foundation and served as Chairman of the Board in 1993-1998. He was also a member of Masons & Shriners and Past President of Hutchinson Chamber of Commerce. Frank was involved with AA and served as a mentor to many. He celebrated 44 years of sobriety.

Frank passed away on Wednesday, January 30, 2019, at Harmony River Living Center in Hutchinson, Minnesota at the age of 91 years.