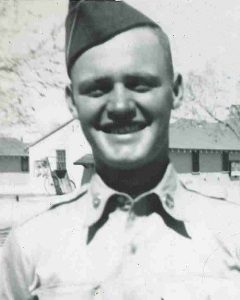 Fredrick “Fred” “Fritz” John Mueller was born on September 4, 1932, in Hamburg, Sibley County, Minnesota. He was the son of John and Elizabeth (Buck) Mueller. Fritz was baptized as an infant on September 18, 1932, and later was confirmed in his faith as a youth on April 14, 1946, both at Emanuel Lutheran Church in Hamburg, Minnesota. Fritz received his education in Hamburg, Minnesota. He entered active military service in the United States Army on February 6, 1953, and served his country during the Korean War. Fritz did his basic training at Camp Roberts in California. He received an Honorable Discharge on January 7, 1955.

In his teenage years, Fritz was a gravel truck driver. After returning from the Korean War, he tiled the land for drainage ditches. Then he worked for Otto Myer Machinery in Green Isle and became a part owner. He also worked for Melvin Koester fixing tractors until he set up his own garage. Fritz was a member of St. Paul’s Lutheran Church in Green Isle, Minnesota. He was also a member of the New Auburn VFW Post #3975, the Green Isle American Legion Post #408 and the Korean Vets-Last Man Standing.

Fritz enjoyed summer and winter fishing and hunting with his wife. He loved the time spent with his family and friends.