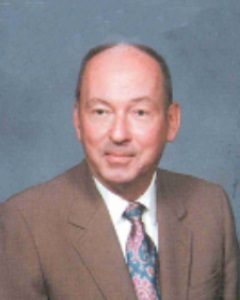 Funeral Service will be held Friday, May 10, 2019, at 11:00 A.M. at New Journey United Church of Christ in Hutchinson with interment in Bohemian National Cemetery in Silver Lake, Minnesota.

Visitation will be held Thursday, May 9, 2019, from 5:00 – 8:00 P.M. at the Dobratz-Hantge Funeral Chapel in Hutchinson and will continue one hour prior to the service at New Journey United Church of Christ.

Military Honors will be provided by the American Legion, Beack-Thompson, MN Post 126.

Memorials preferred to Randy Shaver Cancer Research and Community Fund; memorials may be made directly to www.randyshavercancerfund.org.

George Guy Dostal was born on December 4, 1934, in Hutchinson, Minnesota. He was the son of George Sr. and Marie (Roch) Dostal. He was baptized as an infant and confirmed in his faith as a youth. He received his education in Hutchinson and was a graduate of Hutchinson High School Class of 1952. In his youth, George worked at the Standard Oil Station in Hutchinson as a Gas Station Attendant.

Following High School, George played Tenor Sax with the Wally Pikal Band for a number of years traveling around Minnesota, Iowa, and the Dakotas for a few years.

He attended St. Cloud State College before going into the military.

George entered the active military service in the United States Army on February 5, 1958, in Minneapolis, Minnesota. He served his country and achieved the rank of Specialist 4th Class. He received Honorable Discharge on February 4, 1960, at Fort Eustis, Virginia.

George came home from military service and immediately started work at Minnesota Mining and Manufacturing. He worked his way up through a number of positions retiring in 1997. 3M was a great part of his life and many of his close friends yet today are from his 3M family. A few of them had a surprise birthday party for him in December and he shared that enjoyable time with anyone he talked to.

George enjoyed traveling, gardening, planting flowers and doing yard work. Starting in 1981, George traveled many times to Hawaii with his family. He was happy to walk through the International Market many evenings, or just watch a sunset on the west shore of Oahu. Hawaii was Palekaiko, meaning “paradise” in Hawaiian, to George.

Memorials preferred to Randy Shaver Cancer Research and Community Fund; memorials may be made directly to www.randyshavercancerfund.org.