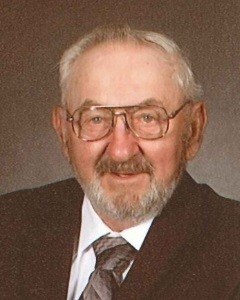 Interment will be held in the church cemetery.  Military Honors will be provided by the Carl O. Potter American Legion Post 135 of Hector.

Visitation will be Thursday from 4:00 – 8:00 P.M. at St. John’s Catholic Church in Hector, with a Prayer Service at 7:30 P.M.  Visitation will continue for one hour prior to the service at the Church on Friday.

George Martin Serbus was born April 4, 1931, in Regal, Minnesota, the son of Joseph and Lillian (Dolezal) Serbus.  He was baptized on April 6, 1931, at the St. Louis Church in Paynesville, and was confirmed in his faith in Bechyn.  George moved with his family to Bechyn where he grew up and attended District 27 country school.  He served his country in the United States Army from April 23, 1953 to April 22, 1955.  At that time, George was transferred to the Army Reserve, and was Honorably Discharged on April 30, 1961.

On September 12, 1955, George was united in marriage to Beatrice Kalkhoff at St. Joseph’s Church in Clements, Minnesota.  Their marriage was blessed with seven children. They lived in Renville for a short time before moving to Fairfax.  They made their home in Hector in 1968.

George was a mechanic for John Deere.  He worked for the City of Hector, and retired in 1993.  George has been a member of St. John’s Catholic Church in Hector since 1968. He was a volunteer member of the Hector Fire Department from 1966 to 1979, and belonged to the American Legion.

George enjoyed life.  A man with a big heart, he loved to help people.  Following his retirement, he was able to devote more time to woodworking.  He loved to dance, especially to the old time music of polkas and waltzes.  He enjoyed playing cards, and watching All-Star Wrestling.