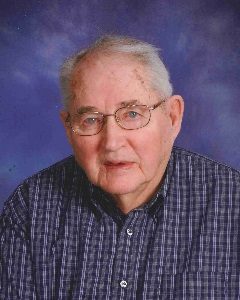 Mass of Christian Burial will be Friday, February 1, 2019, 10:30 A.M. at Church of St. Pius X in Glencoe with interment in the Glencoe Catholic Cemetery.

George Michael O‘Donnell was born on November 8, 1931 in Glencoe, Minnesota. He was the son of Michael and Elizabeth (Reinke) O’Donnell. George was baptized as an infant on November 15, 1931, by Father P.C. Maloney and later was confirmed in his faith on June 8, 1946, both at St. George Catholic Church in Glencoe, Minnesota. He received his education at Glencoe High School graduating with the Class of 1949. He entered active military service in the United States Army on May 22, 1956. He served in Germany for 18 months during the Cold War. George received an Honorable Discharge on May 7, 1958.

On June 24, 1961, George was united in marriage to Jo’Cleta Junn in Minneapolis, Minnesota. George and Jo made their home in Glencoe. Their marriage was blessed with five children: Brian, Brennan, Lisa, Bradley and Denise. George and Jo shared over 57 years of marriage together.

George worked at Johnson Motors as a Service Manager for 42 years. George was a faithful member at Church of St. Pius X in Glencoe, where he was a member of the Knights of Columbus Council and served as a board member at St. Pius School and Catholic Board of Education. He was also a member of the Brewers Baseball Association Board.

He cherished the time spent with his family.

George passed away on Friday, January 25, 2019, at Abbott Northwestern Hospital in Minneapolis, Minnesota, at the age of 87 years, 2 months and 17 days.