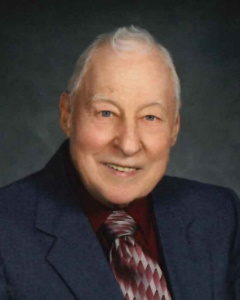 Funeral Service will be held on Friday, August 30, 2019, at 2:00 P.M. at Grace Lutheran Church in Hutchinson with interment in the Immanuel Lutheran Cemetery in Acoma Township, McLeod County, Minnesota.

Visitation will be held on Thursday, August 29, 2019, from 5:00-7:00 P.M. at Grace Lutheran Church and will continue one hour prior to the service at the church.

Gerald “Gerry” Herman Bunkowske was born on December 29, 1927, in Vergas, Minnesota, the son of Ferdinand and Frieda (Sonnenberg) Bunkowske. He was baptized as God’s child on January 22, 1928, and later confirmed in his faith. Gerry received his education in Frazee, Minnesota. He attended college at Dr. Martin Luther College in New Ulm, Minnesota, and went on to teach in Lutheran schools in Acoma Township, Hutchinson, Minnesota, Hortonville, Wisconsin, Eagle River, Wisconsin, Lake City, Minnesota, and Norfolk, Nebraska. After teaching he held various other jobs until retiring in November 2000. Gerry and Eunice returned to Hutchinson where they had met at Immanuel Lutheran Church in Acoma Township.

On July 16, 1950, Gerald was united in marriage to Eunice Sitz at Immanuel Lutheran Church in Acoma Township, McLeod County, Minnesota. This marriage was blessed with four children, Glen, Ruth Anne, Paula, and Jonathan. They shared 61 years of marriage until the passing of Eunice on August 26, 2011.

Gerry was always an active church member, especially serving as organist for 75 years, sharing his gift of music in praising the Lord. Gerry was a faithful member of Grace Lutheran Church in Hutchinson.

He loved gardening, yard work, fishing for sunnies, playing cards and Fastrack, puzzling, ordering chicken at restaurants, and playing with his grandchildren and great-grandchildren.

Gerry passed away on Friday, August 23, 2019, at Hutchinson Health in Hutchinson after a short battle with cancer, at the age of 91 years.

Gerry is survived by his:
Children, Glen Bunkowske and his wife, Bonnie, of Lake City, MN,
Ruth Anne Huebner and her husband, Robert, of Watertown, WI,
Paula Collura and her husband, Michael, of Colorado Springs, CO,
Jonathan Bunkowske and his wife, Caryl, of Watertown, SD;
19 Grandchildren;
9 Great-Grandchildren, 2 of whom will be born this fall;
Sisters-in-law, Helen Bunkowske of Helena, MT,
Caroline Gorentz of Vergas, MN;
Brother-in-law, Robert Sitz and his wife, Mary, of Hutchinson, MN;
Special Friend, Dolores Schindler of Hutchinson, MN;
Many other relatives and friends.

Gerald Bunkowske confessed joyfully that Jesus was his Savior. He had no doubt about being saved by Jesus or living eternally in heaven. God promises, “The wages of sin is death, but the gift of God is eternal life in Jesus Christ our Lord.” Blessed be his memory as he entered his heavenly home with Jesus Christ, his Savior.