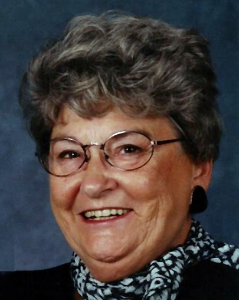 Mass of Christian Burial will be held Thursday, October 22, 2015, 11:00 A.M. at Church of St. Pius X in Glencoe, Minnesota, with a private family interment at Fort Snelling National Cemetery in Minneapolis, Minnesota.

Harriet Alma Estelle (Nagel) Kruckman was born on October 11, 1927, in Selfridge, North Dakota.  She was the daughter of Fredrick and Elfia (Olson) Nagel.  Harriet was baptized as an infant at a Lutheran Church in Selfridge, North Dakota, and was later confirmed in her faith as a youth in 1942 at St. John’s Lutheran Church in Arlington, Minnesota.  She received her education in Arlington, Minnesota, graduating with the Arlington High School Class of 1946.

On August 25, 1951, Harriet was united in marriage to Floyd Kruckman at the St. Clara Catholic Church in Clara City, Minnesota.  Harriet and Floyd made their home in South Dakota, Marshall and Glencoe, Minnesota.  Their marriage was blessed with four sons, Kevin, Kelly, Kurt and Keenan.  Harriet and Floyd shared over 59 years of marriage together until Floyd passed away on July 9, 2011.

In addition to being a loving wife, mother and homemaker, Harriet worked in the factory at Green Giant and Starkey Labs in Glencoe, Minnesota, retiring in 1987.  She was a member of Church of St. Pius X in Glencoe.

Harriet passed away on Wednesday, October 14, 2015, at Glencoe Regional Health Services Long Term Care in Glencoe, Minnesota, at the age of 88 years and 3 days.