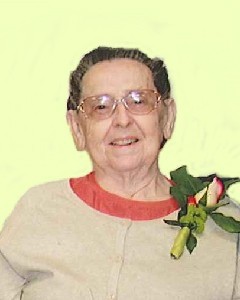 Hazel Schmidt, age 92, of Winthrop, passed away Friday, March 27, 2015, at the Good Samaritan Center in Winthrop.

Funeral Service will be Thursday, April 2nd, 10:00 A.M. at the Apostolic Christian Church in Winthrop, Minnesota, with interment in the Winthrop Cemetery.

Hazel Viola (Messner) Schmidt was born on April 16, 1922, at home in Alfsborg Township, Sibley County, Minnesota. She was the daughter of Levi and Mae (Miller) Messner. Hazel received her education at country school. She helped care for her younger siblings.

On December 27, 1941, Hazel was united in marriage to Elmer Schmidt in Mankato, Minnesota. Hazel and Elmer spent most of their married life in Lafayette. In 2010 they moved to Winthrop, Minnesota. Hazel was employed as a nurse’s aide at the Lafayette Good Samaritan Center for 30 years. She was a beloved wife, giving mother and caring grandmother. Hazel and Elmer were blessed with eight children, and they shared 73 years of marriage before Elmer passed away on February 22, 2015.

Hazel was baptized in August of 1939 at the Apostolic Christian Church.

Hazel enjoyed gardening, entertaining friends and family and in general caring for others. She loved spending time with her family especially her children, grandchildren, and great-grandchildren.

When she needed assistance with her daily care, Hazel became a resident of the Good Samaritan Center in Winthrop in December of 2014, where she passed away March 27, 2015, at the age of 92 years. Blessed be her memory.