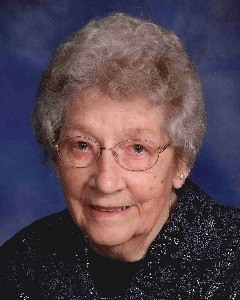 Funeral Services will be held Friday, February 19, 2016, at 11:00 A.M. at St. Paul Evangelical Lutheran Church in Lester Prairie, Minnesota, with interment following at the church cemetery.

Visitation will be held Thursday, February 18, 2016, from 4:00 – 8:00 P.M. at Paul-McBride Funeral Chapel in Lester Prairie, Minnesota, and will continue one hour prior the service at the church on Friday.

Helma Wilhelmine Hoernemann was born on December 24, 1921 in Washington Lake Township, Carver County, Minnesota. She was the daughter of William and Martha (Jaus) Panning.  Helma was baptized on January 1, 1922, and was later confirmed on April 14, 1935,  both by Rev. H.J. Bouman at Emanuel Lutheran Church in Hamburg, Minnesota.  She attended Emanuel Lutheran Parochial School and District #40 School at Hamburg through the 8th grade.

On May 4, 1946, Helma was united in marriage to Karl Hoernemann at Emanuel Lutheran Church in Hamburg. The couple made their home in Bergen Township where they began to farm together.  Their marriage was blessed with six children, Arline, Beverly, David, John, Mary and Lynn.  In 1966, they moved off the farm to a home they built outside of Lester Prairie.  Helma and Karl shared over 58 years of marriage, until Karl passed away on December 16, 2004.

Over the years Helma had a few jobs beyond being a farmwife and mother which included, sewing at Strutwear Clothing Manufacturing in Glencoe and after her children were in school she took employment at the lunchroom in Lester Prairie for a number of years. In the earlier years, Helma was a member of the local Home Extension Group and also the American Legion Auxiliary.

Helma’s focus was her family and it reflected in her talents and hobbies. She sewed for her family and enjoyed quilting.  Helma always had a garden, which lead to lots of canning and baking.  She enjoyed reading and a good game of Dominos if it was with her dear family and friends.

Helma passed away peacefully on Saturday, February 13, 2016, at Elim Rehab and Nursing home in Watertown, Minnesota, at the age of 94 years, 1 month and 21 days.