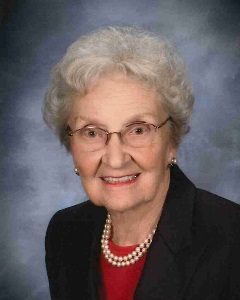 Memorial Service will be held on Monday, July 1, 2019, at 11:00 A.M. at Dobratz-Hantge Funeral Chapel in Hutchinson with interment in the Oakland Cemetery in Hutchinson.

A Gathering of Family and Friends will be held one hour prior to the service at the chapel.

Irene Elizabeth Scharmer died peacefully at Solvay Hospice House on June 1, 2019.  She lived a full and busy life for 96 years, living 61 years in Hutchinson and her final seven years in Duluth.

Irene was born July 3, 1922, in Omaha, Nebraska to Martha (Blasig) and Fred Dietrich.  She attended school in Omaha, graduating from South High School in June 1940, where she was honored as Outstanding Senior Girl for academic excellence and leadership.  Her education was complemented by six years of Intensive German School where the German language and script was taught.  As a result, throughout her life, her handwriting was remarkably beautiful.

Following graduation, Irene worked for Northern Natural Gas Company in Omaha in the payroll department where her math skills and attention to details were appreciated.

Irene married Ruben William Scharmer on December 26, 1943, in Omaha.   The young couple moved to Little Rock, Arkansas while Ruben was stationed at the Robinson Army base and where Irene worked in payroll.

Irene moved to Waconia, Minnesota in February 1944, and Ruben followed when he came home from the service.  In 1952 they moved to Hutchinson, Minnesota and opened Scharmer Upholstery.   Irene worked both as a sewer and accountant for the business.  She was active at Peace Lutheran Church, teaching Sunday school and Release Time classes, and as a Girl Scout troop leader.

Irene and Ruben enjoyed 63 years of marriage, raising three children and building a business together.  Irene will be remembered for her incredible cooking and baking skills; many loaves of fresh bread, doughnuts, and caramel rolls came out of her kitchen, along with fresh jams, jellies, and canned goods.  She spoiled her family with fresh, healthy and tasty meals, created from her expansive garden.  She was a seamstress of great skill, and her girls were some of the best-dressed kids around in professionally fitted and tailored clothes.  Her “just do it” skills came in handy at a lot on Lake Minnie Belle, where Irene gave flair to the process of building the family cabin.  Many great summers were spent enjoying the cabin starting in 1955, and it continues to build memories even today as it remains in the Scharmer family.

In retirement Irene and Ruben enjoyed 23 “snowbird” years in Arizona balanced with summers on Lake Minnie Belle.  After Ruben’s death, Irene moved to Duluth where she developed a group of wonderful friends and had many enjoyable years.

Irene will be deeply missed by her family and friends.  Her incredible sense of humor, keen negotiation skills, quick mind, loving spirit, and many talents will long live in our memory and family stories.  Rest in peace dear Irene.