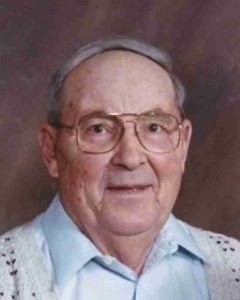 Interment will be held at a later date in the Hector City Cemetery.

Gathering of Family and Friends will be held Saturday, February 13, 2016, from 9:30 – 11:00 A.M. prior to the Funeral Service, ALL at Faith Lutheran Church in Hutchinson.

Ivan Joseph Wersal was born August 7, 1925, in Stately Township, Brown County, Minnesota, the son of Joseph and Emma (Sydow) Wersal. He was baptized as an infant, and confirmed in his faith as a youth at the Moravian Church in Bird Island. Ivan was raised on a farm in rural Bird Island, Minnesota, and received his education in the country school in Osceola Township, Renville County.

On June 11, 1955, Ivan was united in marriage to Donna Bohmer at the Winsted Holy Trinity Catholic Church. They made their home on the   farm place where Ivan grew up. Their marriage was blessed with five children, Deb, Dan, Glenn, Roger, and Sandy. Ivan farmed in the Hector / Bird Island community. He also worked at Millerbernd Manufacturing Company in Winsted a couple of years, and for Green Giant of Glencoe during the summer for two years. After he retired from farming in 1990, they moved to Atwater. Ivan and Donna had shared 53 years of marriage when Donna passed away on December 9, 2008. Ivan moved to Hutchinson in October of 2013.

In his younger years, Ivan loved to go hunting. He still enjoyed fishing, both angle and ice. Ivan and Donna spent many winters in Arizona, and while there, Ivan played softball and enjoyed wood crafting. His wooden crafted bowls, pens, and pencils will be cherished keepsakes. He and Donna enjoyed traveling, especially their trips to Alaska, Hawaii, and Australia. Ivan enjoyed reading, and playing cards with the card club. His favorite times were spent with his children, grandchildren, and great-grandchildren.

On Sunday afternoon, February 7, 2016, Ivan passed away at the Hutchinson Health Hospital, having reached the age of 90 years. Blessed be his memory.

Ivan is survived by his:

Ivan was preceded in death by his Parents, Wife Donna Wersal, Granddaughter Michelle Ulrich, his brothers and sisters, and numerous brothers-in-law and sisters-in-law.