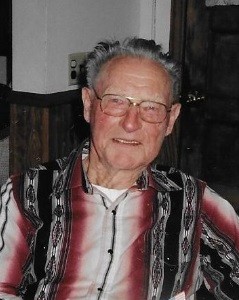 Cisitation will be held Wednesday, December 2, 2015, from 4:00 - 7:00 P.M. at Johnson-McBride Funeral Chapel in Glencoe, Minnesota, and will continue one hour prior the service at the church on Thursday.

Ivan Leonard Donnay was born on October 22, 1916, in Outlook, Montana.  He was the son of Leonard and Bertha (Kelm) Donnay.  Ivan was baptized as an infant on October 29, 1916, by Rev. Febrauer in Outlook, Montana, and was later confirmed in his faith as a youth on June 22, 1930, by Rev. Kolbe at First Evangelical Lutheran Church in Glencoe, Minnesota.  He received his education in Glencoe, Minnesota.  Ivan Donnay enter active military service in the United States Army at Fort Snelling, Minnesota, on September 11, 1941. After training as a cook, he was assigned to Company L, 160th Infantry Regiment and fought in the Pacific Theater during World War II seeing action throughout the Pacific including battles on the Bismarck Archipelago, the South Philippines and on the Island of Luzon which earned him the Combat Infantryman Badge in addition to multiple campaign medals. He was honorably discharged as a Technician 5th Class at Camp McCoy, Wisconsin, on October 1, 1945.

Ivan was a farmer and later worked at Stearnswood Inc. in Hutchinson, Poly Foam Inc. in Lester Prairie, was a janitor at Silver Lake High School in Silver Lake, and was a caretaker for Doc Erickson in Annandale.  Ivan was a past member of Zion Lutheran Church in Annandale.  He also served on the Rich Valley Township board.

Ivan enjoyed fishing, deer hunting, playing cards, traveling, watching football, fixing anything and carpentry.  He loved to tell jokes to anyone he’d meet.  Ivan cherished the time spent with his family and friends.