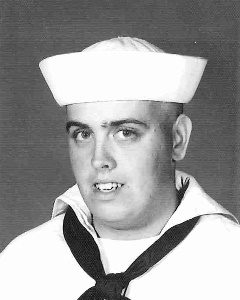 Jerry Ray Anderson was born to Raymond and Lucille Anderson on October 31, 1948, in the Willmar Hospital.   After graduating from Hector High School in 1968, he attended the Pipestone Vocational Technical Academy before enlisting in the Navy in February 1969. After Basic Training, Jerry was assigned to the Engineering Department of the aircraft carrier, USS Bon Homme Richard, as a Fireman and a Mess Cook.  While on active duty, he was able to visit the Hawaiian Islands, the Philippine Islands, Korea, Wake Island and Japan. The ship also spent time off the coast of South Vietnam providing air support during the Vietnam War.  Due to back injuries suffered in a fall onboard ship, Jerry was discharged from the Navy in April 1971.

When he returned home, he helped our step-father, Carl Lundstrom farm.  Jerry also worked for Iowa Pork at the Buffalo Meat Packing Plant for seven years and for Communication Systems Incorporated in Hector for 13 years.  In addition, he worked for Hector Agriculture in the spring and fall delivering fertilizer and cleaning beans and grain.

While his hobbies included hunting and fishing, Jerry truly loved to fish.  He could be found with a fishing pole in his hand on the shore of a number of lakes all summer long.

Jerry passed away peacefully Sunday afternoon, July 28, 2019 at the Buffalo Lake Healthcare Center having reached the age of 70 years.  Blessed be his memory.

Jerry was preceded in death by his parents, Raymond Anderson and Lucille Lundstrom, his sister Judy Johnson and his brother Joel Anderson.