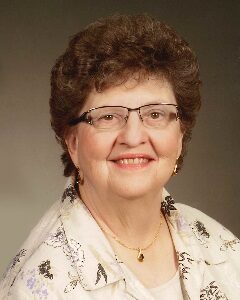 Private Family Graveside Service will be held at Ripley Cemetery in Litchfield.

JoAnn Marie Nygaard was born on September 10, 1944, in Hutchinson, Minnesota. She was the daughter of Clarence and Bessie (Getz) Seller. JoAnn was baptized as an infant in Silver Lake, Minnesota, and later confirmed in her faith as a youth at the Congregational Church in Hutchinson. She received her education in Hutchinson and was a graduate with the Hutchinson High School class of 1963.

On January 25, 1964, JoAnn united in marriage to the love of her life, Dennis Nygaard at the Congregational Church in Hutchinson, Minnesota. This marriage was blessed with two children, Kevin and Brenda. JoAnn and Dennis lived and raised their family in Litchfield. They shared 54 years of marriage.

JoAnn was employed at Fingerhut, sold Avon, and was a cook at Augustana Homes.

She enjoyed cooking, puzzles, board games, and computer games. JoAnn was a member of Zion Lutheran Church in Litchfield.

JoAnn passed away on Wednesday, November 18, 2020, at CentraCare – St. Cloud Hospital, at the age of 76 years. Blessed be her memory.