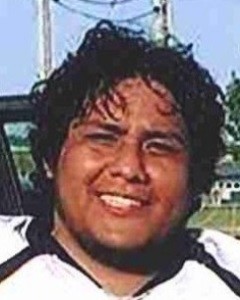 Mass of Christian Burial will be Friday, February 26, 2016, at 11:00 A.M. at St. John’s Catholic Church in Hector, with interment in the Buffalo Lake City Cemetery.

Joel Alejandro Gomez - Avila was born June 30, 1994, in Matamoros, Tamaulipas, Mexico, the son of Enrique and Maria Gomez. He was baptized on October 9, 1994, at Parraquia De San Antonio De Padua 1 in Matamoros.  Joel moved with his family to Buffalo Lake, Minnesota. He grew up in Buffalo Lake, Minnesota, and received his education at the Buffalo Lake Hector Schools and BOLD. He then moved to Worthington to live with his older brother, Enrique Gomez, where he attended ALC School.  He then returned to Buffalo Lake and was employed with Triple J Farms.

Joel loved football. He played for the Buffalo Ridge Wildcats in the Southern Plains Football League, along with his brothers, Enrique and Josue.

Joel liked to joke around. He could be sarcastic and stubborn at times, but he was fun to be with. He enjoyed music, and Chinese food was his favorite. Joel loved his family.