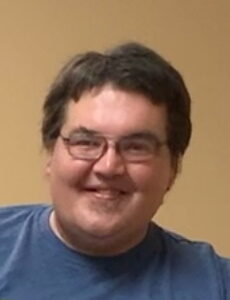 John was born left-handed on March 9, 1976, to Clellan and Kathy (Jandl) Weldy. He was the 5th of 6 children and was welcomed with great joy by his older brothers and sisters, who got to pick his name and chose John, who represented one of the family’s favorite babysitters.  His left-handedness played into everything he did and he couldn’t understand why he was born left-handed in this right handers world. In later years, he would be joined by his Goddaughter and niece Grace, also born in March and a left hander too!

John was baptized and made his first holy communion at St. Andrew’s Catholic Church. He attended Saint Andrews Catholic Grade School and served as an altar boy.

As a young boy, John loved going to the family dairy farm to do chores and putz. He could often be found “fixing,” he loved taking things apart to understand how they worked, but always seemed to have extra pieces when putting them back together again. He was a member of the Cairo Sharpshooters and showed cows each year at the Renville County Fair and sometimes, if a winner there, at the State Fair.

John attended GFW High School and graduated with the Class of 1994!  John was a wrestler and one year was part of a team that included his two older brothers, Dave and Joe. John was a proud champion of Mr. Zellmann’s yearly “them is an adjective, not a pronoun,” Dishonor Roll and has one of “them there” papers to prove it. He worked hard to come up with new ways to get on that list. Despite this grammar setback, he never lost his love for education and made it a constant quest to gain knowledge through reading and conversations with his many friends in the community. Most of the time, his knowledge came from the “Uncle John’s Bathroom Readers,” but put him on Jeopardy, and there is no doubt he could have won.

John’s work life has always included driving big trucks. He worked for Schweiss BiFold doors as an installer, for Loftness Manufacturing, driving grain trucks and helping area farmers with field work during harvest. He spent most of his career working for J R Schugel and traveling to the West Coast to deliver goods. He made good friends at each location and enjoyed the travel, new scenery, local cuisine, and reporting back on the areas he visited. When a health issue prevented him from driving truck professionally, he went to work with the United States Postal Service as a substitute mail carrier in the Winthrop zip code.

John enjoyed refurbishing old A C tractors with his dad Clellan, spending time with his uncle Craig, “Bub” attending auctions to collect local area memorabilia, and working the daily crypto quote puzzle with his mom Kathy. He enjoyed cooking dinner for family and friends, and debating any subject, to include politics, on his deck. There was always a cold beer for anyone who stopped.  John was proud of helping to get the Fairfax Jaycees Chapter started up again and often worked in the background at their events. He enjoyed driving the Jaycee clown car in the parades the most.

John also loved the Christmas Holiday and for many years was one of Santa’s helpers appearing at family gatherings in his Santa Suit to the delight of his nieces.

He excelled at finding “just the right gift” and was spoiled by his nieces, who saw right through that gruff exterior to the loving teddy bear he really was. He loved watching It’s a Wonderful Life, The Christmas Story, and National Lampoons Christmas Vacation–an activity he could share with everyone.

John was preceded in death by his maternal grandparents, Leo and Regina Jandl, his paternal grandparents, Lyle and Vera Weldy; and his beloved Uncle’s, Craig and Floyd Weldy and Jerry Jandl, his Godfather; Aunts, RoseMary Sadler and Jackie Marketon; cousins, Ryan Rogness and Anita Sadler.  We hope they were all there, along with our heavenly father, the day that Johnny came marching home.