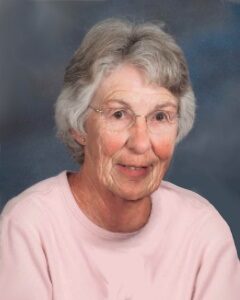 Memorial Service will be held on Friday, February 5, 2021, at 3:00 P.M. at Dobratz-Hantge Funeral Chapel in Hutchinson.

Joyce Elizabeth Conn was born on September 4, 1929, in Manchester, Iowa. She was the daughter of James and Merna (Veden) Fee. Joyce was baptized as an infant and later confirmed in her faith. She received her education in Wadena and was a graduate with the Wadena High School class of 1947.

She enjoyed golf, traveling, and walking her dog. Joyce especially enjoyed spending time with her family and friends.

Joyce passed away on Tuesday, February 2, 2021, at Harmony River Living Center in Hutchinson, at the age of 91 years. Blessed be her memory.