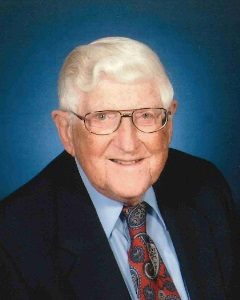 Memorial Service will be held on Friday, April 26, 2019, at 11:00 A.M. at Christ the King Lutheran Church in Hutchinson with interment in Oakland Cemetery in Hutchinson.

Gathering of Family and Friends will be held Thursday, April 25, 2019, from 4:00-7:00 P.M. at the Dobratz-Hantge Funeral Chapel in Hutchinson, and will continue one hour prior to the service at the church.

Kenneth “Ken” Edwin Jensen was born March 13, 1924, on a farm north of Hutchinson, Minnesota to Dagmar and Amandus Jensen. At age 7 his family moved to a farm south of Hutchinson near Lake Marion. Ken attended a country school all 8 grades. He graduated from Hutchinson High School in 1941. In 1943 he enlisted in the Air Force and served 3 years.

On July 19, 1946, Ken was married to Lillian Hansen at Faith Lutheran Church by Lillian's father, Rev. N.B. Hansen. They had 5 children born of their marriage.

After the Air Force, Ken went into business with Elmer Nelson as a partner in the Cities Service Gas Station across from the post office in Hutchinson. After 5 years, he had to leave the station due to recurring back problems.

For one year Ken sold clothing door to door for MN Woolen Mills of Duluth. He then joined Lutheran Brotherhood Insurance in 1952 and worked with them for 35 years, the last 15 years as District Manager over 11 counties.

Ken and Lil owned a cabin on Lake Minnebelle for 20 years and then bought a year-round home on the lake where they lived for 15 years. The whole family enjoyed those years at the lake.
In retirement, Ken and Lil spent winters in Florida and did a lot of traveling, which they both enjoyed.

Ken served 25 years on the Board of Directors of First State Federal Savings & Loan, he was on the Hutchinson Hospital Foundation Board for 6 years and served as its' chairman. Ken was M.C. for 14 years at the Hutchinson Chorister's Concert, which sold out every year. In 1990 he was honored to be chosen as Mr. Hutchinson by the Hutchinson JC’s as part of the annual Hutchinson Water Carnival Celebration.

Ken was very dedicated to his Christian principles all his life, serving his Lord wherever he could. He was a founding charter member of Christ the King Lutheran Church where he was a Sunday school superintendent, church council member and president for several years and served on many boards and committees. For many years he led the congregation in singing hymns for 10 minutes before church started, even in his upper 80's. After Ken’s wife, Lil, entered a memory loss home, Ken started doing half-hour programs every month in 4 local assisted living homes. Ken was highly respected in his church and the community.

Ken is survived by his:
Children, Barbara Fluth and her husband, Barry, of Big Lake, MN,
Jan Metcalf and her husband, Richard, of Silver Springs, MD,
Dick Jensen and his wife, Lori, of Breezy Point, MN,
Randy Jensen and his wife, Lisa, of Lakeville, MN,
Bonnie Jensen of Hutchinson, MN;
14 grandchildren;
14 great-grandchildren;
Sister, Jane Reid of Albert Lea, MN,
many other relatives and friends.

Ken was preceded in death by his Wife, Lillian Jensen, Parents, Dagmar and Amandus Jensen, and his Brother, Leonard Jensen.