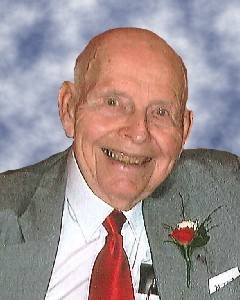 Kenneth Nelson age 95, of Fairfax, passed away October 10th, 2015, at the Fairfax Community Home in Fairfax.

Visitation will be Sunday, October 18th, from 4:00 P.M.-7:00 P.M. at the Hauser-Hantge Funeral Home in Fairfax. Visitation will continue one hour prior to the service at the church on Monday.

Kenneth Otto Nelson was born on December 28, 1919, at home in Camp Township, Renville County, Minnesota. He was the son of Nels and Minna (Semerud) Nelson. Kenneth was baptized as an infant and was later confirmed in his faith as a youth, both at Camp Lutheran Church, Camp Township, Renville County, Minnesota. He received his education at country school. Kenneth farmed his entire life.

On March 1, 1946, Kenneth was united in marriage to Esther Anderson at Palmyra Covenant Church. After their marriage, they rented and farmed a number of farms before moving to the Nelson family farm in 1964. He was the township clerk for 30 years. He sold Palmyra Farmers Insurance and was also on the Board of Directors for 30 years. Kenneth and Esther were blessed with three children and they shared 64 years of marriage before Esther passed away on June 14, 2010.

Kenneth was a member of Palmyra Covenant Church.

Kenneth supported his children in their 4-H projects and loved to attend the county fair. He loved collecting antiques. Kenneth loved spending time with his family, especially his grandchildren and great-grandchildren. All of his family was very important to him.

When he needed assistance with his daily care, Kenneth became a resident of the Fairfax Community Home on January 6, 2012, and passed away there on Saturday, October 10, 2015, at the age of 95 years. Blessed be his memory.

Kenneth is survived by his: