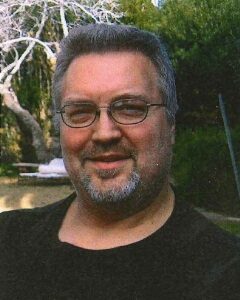 Kevin J. Hjerpe, age 55, of Hutchinson, Minnesota, passed away on Saturday, November 30th, 2019, at his home in Hutchinson.

Funeral Service will be held Saturday, December 7th, 2019, at 10:00 A.M. at Faith Lutheran Church in Hutchinson with interment in the Redwood Falls Cemetery in Redwood Falls, Minnesota.

Kevin James Hjerpe was born on April 28, 1964, in Fergus Falls, MN. He was the son of Howard and Marilyn (Wareberg) Hjerpe. Kevin was baptized at First English Lutheran Church in Fergus Falls, MN and was confirmed in his faith at Gloria Dei Lutheran Church in Redwood Falls, MN. He received his education in Redwood Falls and was a graduate of the Lincoln High School Class of 1982. Kevin went on to further his education at St. Olaf College in Northfield, MN, graduating in May of 1986 with his Bachelor of Arts degree in English.

After graduation, Kevin worked in heavy equipment construction with his father Howard at Hjerpe Corporation of Redwood Falls. In July 1988, he traveled to Tokyo, Japan to teach English grammar at Yasuda High School. While living in Japan, he also served as an English language tutor and editor. Throughout his life, Kevin worked for several companies in writing and editing, including Hjerpe Contracting of Hutchinson, MN; Augsburg Fortress Publishers of Minneapolis, MN; CSC Publishing of Richfield, MN; Norwest Bank (Wells Fargo) of St. Louis Park, MN; and Rickert Excavating, formerly of Brownton, MN. Kevin did not know a stranger and went out of his way to make guests feel welcome.

Kevin had a lively sense of humor, a sensitive heart, and a great affection for his nieces and nephews. He had a passion for collecting rare rocks and swords, playing piano, listening to music, watching horse races and movies, and throwing competitive darts. A life-changing car accident in 2003 did not dampen Kevin’s love for NASCAR Racing, and he went on to attend several speedway events over the years with his friends. Kevin always loved a good meal--especially spicy curry!--and he developed a love for making family recipes in his recent years. Kevin also invented a few of his own recipes, including his infamous “Apple Pie,” made from the fruit of his own apple tree.

Kevin passed away suddenly and too soon at his home in Hutchinson on Saturday, November 30, 2019. He was 55 years old, and he will be greatly missed by the family and friends who love him.

Blessed be the memory of Kevin James Hjerpe.

Kevin is preceded in death by his Father, Howard Hjerpe; Grandparents, Omar and Estella Wareberg and William and Fern Hjerpe; and Infant Niece, Rachel Jean Hjerpe.

The family invites everyone to the luncheon at the church immediately following the funeral service. For all who are able to travel, internment will follow at 1:30 pm at Redwood Falls Cemetery in Redwood Falls, MN.